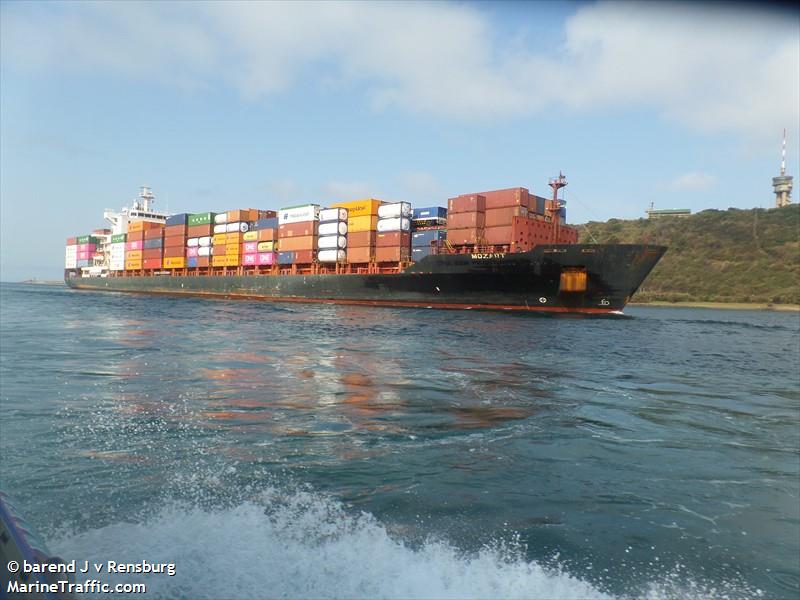 One Killed, 15 Kidnapped in Violent Pirate Attack Off Nigeria

Pirates off Nigeria’s coast kidnapped 15 sailors from a Turkish container ship in the Gulf of Guinea on Saturday in a brazen and violent attack that was farther from shore than usual.

One sailor was killed in the raid, an Azerbaijani citizen, while those kidnapped are from Turkey, according to the respective governments and a crew list obtained by Reuters.

Accounts from crew, family members and security sources described a sophisticated and well-orchestrated attack on Saturday in which armed pirates boarded the ship and breached its protective citadel, possibly with explosives.

Three sailors remain on the Mozart, which was approaching Gabon’s Port Gentil on Sunday and expected to dock, according to Refinitiv Eikon data. The Liberian-flagged vessel was headed to Cape Town from Lagos when it was attacked 160 kilometres (100 miles) off Sao Tome island on Saturday, maritime reports showed.

Turkish President Tayyip Erdogan’s office said on Sunday he was orchestrating officials in the “rescue of kidnapped ship personnel”.

Erdogan spoke twice by phone with the ship’s fourth captain, Furkan Yaren, who remained aboard after the attack, his office said.

State-run Anadolu agency cited Yaren as saying he had been “cruising blindly” toward Gabon with damage to the ship’s controls and only the radar working. The pirates beat crew members, and left him with an injured leg while another still aboard the ship had shrapnel wounds, he said.

Turkish media cited Istanbul-based ship owner Boden company as saying the owners and operators of the vessel were abducted at gunpoint. Boden was not immediately available.

Ambrey, a security company, said four armed men boarded the Mozart and entered the citadel – where crew are advised to hide in any attack – from a deck atop the cabin.

Edward Yeibo, a Nigerian Navy commander, said he was not aware of the attack and seeking details. The Lagos naval command office and a spokesman for Nigeria’s maritime regulator were not immediately available.

Pirates in the Gulf, which borders more than a dozen countries, kidnapped 130 sailors in 22 incidents last year, accounting for all but five of those seized worldwide according to an International Maritime Bureau report.

The attack on the Mozart could raise international pressure on Nigeria to do more to protect shippers, which have called for tougher action in recent weeks, analysts said.

“The fact that someone died, the number of people taken and the apparent use of explosives to breach the ship’s citadel means it is a potential game-changer,” said David Johnson, CEO of the UK-based EOS Risk Group.

“It’s clearly quite sophisticated and if pirates have decided to use munitions it’s a big move,” he said. There is “no doubt” those kidnapped will be taken back to Nigeria’s Delta and Turkey will have little hope stopping it, he added.

Turkey’s foreign ministry said the pirates had not made any contact with Ankara.

Seyit Kaya, brother of the ship’s kidnapped 42-year-old captain Mustafa Kaya, a father of two, said in an interview he awaited details from the ship’s owner on any possible ransom. “Since that area is where many attacks take place, they take cautions against pirates,” said Kaya, who is also a sailor.