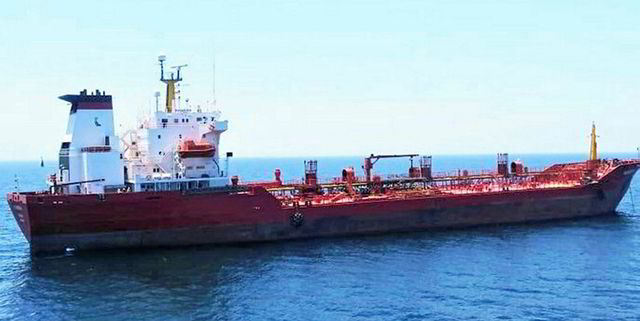 Doubt has been cast over reports that pirates have hijacked a Panamanian-flagged chemical tanker in Somalian waters.

The 8,143-dwt Aegean II (built 1994) was believed to have been raided on Tuesday by six pirates after the ship developed mechanical issues, maritime security consultancy Dryad Global said.

The tanker was reportedly on a voyage from the UAE to Mogadishu when it was attacked roughly 333km southwest of the Yemeni island of Socotra.

But security consultancy Ambrey told TradeWinds the ship was boarded by six “uniformed personnel” off Bereeda.

One local media report has stated that Puntland “police” seized the vessel on suspicion of it dumping “poison” off the coast.

Ambrey has verified that a sheen, possibly an oil spill, could be seen in the vicinity hours before the incident. This has been corroborated by an independent naval source.

“However, there is no evidence this was caused by the tanker,” Ambrey said.

According to the same report, embarked armed guards fired three shots at the “police” as they approached. This has not been substantiated.

No injuries have been reported.

A further media report has stated that “men sent by locals” removed weapons from the vessel. Ambrey has confirmed the security team’s weapons were reported seized.

On 18 August the ship reported engine problems and was awaiting assistance, Ambrey said.

This indicates it was not attacked whilst underway.

Dryad Global said the ship slowed from six knots to one knot, then abruptly sped up to 11 knots and turned north where it was taken to its current location offshore Bereeda, Somalia. IHS Markit indicates that the vessels is owned by Aegean Marine Shipping, and operated and managed by Hanan Shipping. Both companies are listed as having offices in Dubai. Neither Hanan Shipping nor the Panama Ship Registry returned requests for comment.

Once the world’s foremost region for piracy, attacks in and around Somalian waters have cooled off in recent years.

In the first six months of 2020, the International Maritime Bureau (IMB) reported no incidents attributable to Somali pirates versus 98 worldwide.

More recently the focus has shifted to piracy in West Africa and the Gulf of Guinea, where the IMB said 32 seafarers had been kidnapped in the three months ending 30 June.

Despite this, the agency said, “Somali pirates still maintain the capability for carrying out attacks”.

In its note describing the attack, Dryad said the threat remains “credible”, but downplayed the incident as an indicator of a resurgence of piracy in the region.

“So far, this incident appears to be an isolated and opportunistic incident which seized on a vessel in a vulnerable situation, which had transited close to Somali” territorial waters, it said.