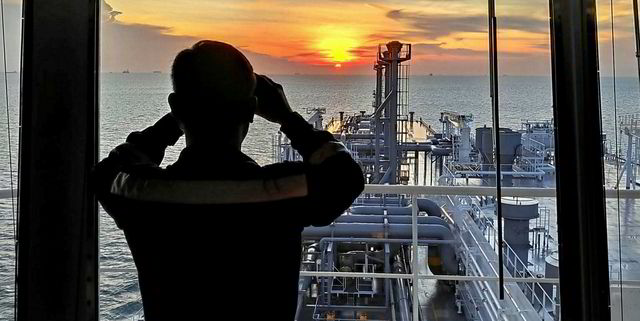 Fatigued crews practising lower levels of vigilance could be a factor leading to a steep rise in the number of armed robbery incidents that took place in the Singapore Strait during the first half of 2020.

Masafumi Kuroki, executive director of the Singapore-based Regional Cooperation Agreement on Combating Piracy and Armed Robbery against Ships in Asia (ReCAAP), said on Thursday that there there was no concrete evidence to link the coronavirus pandemic to the increase in incidents in the Singapore Strait and elsewhere in Asia.

But he said crew fatigue as a result of prolonged work periods at sea could not be dismissed as a factor.

“It is possible that fatigued crews are tired and not keeping a vigilant watch,” he said, while stressing that this was his personal opinion as Singapore-based ReCAAP was not a research organisation and could not make professional determination on the matter.

Kuroki said ReCAAP was especially concerned about the Singapore Strait, which recorded a total of 16 incidents during the first six months of the year.

The majority of these events took place in the Eastbound lane of the traffic separation scheme in the hours of darkness.

Three tankers and seven bulk carriers were among the ships that reported they had been boarded by robbers who attempted to make off with engine spares or scrap metal. In several cases the perpetrators were armed with knives.

Kuroki said that it was imperative that crews on ships transiting the Singapore Strait maintain a vigilant lookout at all times.

ReCAAP, he added, was calling for increased surveillance and policing by the countries on the strait.

“The arrest of criminals is very important for deterrence,” Kuroki said, adding that while the severity of the incidents taking place in the Singapore Strait remains low, it is still a reason for concern.

“Small crimes, if not addressed, can encourage criminals to commit larger crimes in the future.”

Only one incident that took place in the Singapore Strait led to arrests.

A quick-thinking crew detained them in the engine room until they could be handed over to an Indonesian navy patrol boat.

“I hope that this kind of arrest will continue in the future,” Kuroki said.

He noted that in 2015 there were 99 boarding incidents in the Singapore Strait. After Indonesian authorities made a number of arrests, incidents dropped to only two the following year.

ReCAAP figures for the first half of 2020 released in Thursday indicate that piracy and armed robbery increased throughout Asia during the period, with a total of 51 incidents reported across the region.

This figure was almost double the number of 28 incidents reported for the corresponding period in 2019.

Kuroki said that there were different reasons for increases in different locations. He cautioned that while Covid-19 had led to severe economic hardships, there were no causal relationships that allowed the increase to be linked with the pandemic.(Copyright)