In its weekly report for 16-22 June, ReCAAP ISC informed of one armed robbery against ship in Asia. The CAT 4 incident occurred onboard a tanker anchored at Merak anchorage, Indonesia.

In the early morning hours of 17 June, the Singaporean-flagged tanker BW Zambesi was at Merak Anchorage, Indonesia.

At about 2:00 am, the chief engineer on his rounds discovered that the ship’s Inert Gas System (IGS) weathertight door handle was broken.

Following a search on board the ship, the crew found there was no sign of forced entry, but some generator spares were missing from the engine room.

They also found the net lashing on the port side had been cut; and suspected the perpetrators could had entered and exited from there. There was no injury to crew. 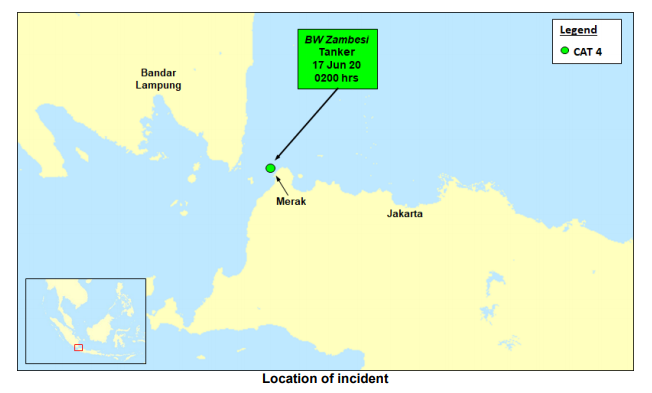 The weekly report contains also an incident outside Asia.

The Singaporean-flagged tanker BW Tagus was about 250 nm off Nigeria, Gulf of Guinea, on 14 June.

While drifting on the high seas, a suspicious craft, ‘Via Avenir’, pursued the tanker.

The duty officer sighted the craft altering course in the direction of the tanker and increased its speed to approximately 14.5 knots.

To deter the pursuit, the ship undertook evasive manoeuvres and maintained at high speed until the ship was at a safe distance from the craft.

Consequently, there was no injury to crew.