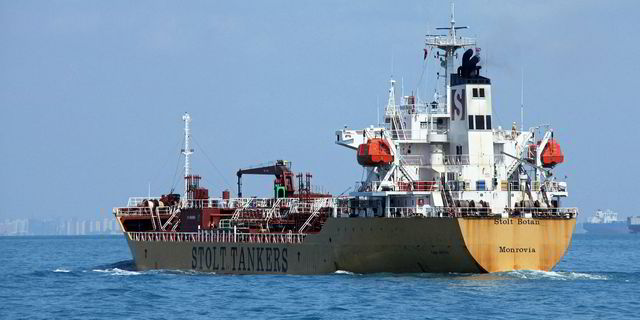 No injuries or serious damage to Stolt Apal after six pirates in two skiffs attempted to intercept the ship.

Armed guards on a Stolt-Nielsen chemical tanker have been involved in a brief gun battle with pirates who attacked the vessel as it sailed through the Gulf of Aden on Sunday.

There were no casualties reported on board the tanker, which is now continuing its laden voyage towards the Suez Canal.

The attack is thought to be the ninth in the region this year, although the overall level of piracy in the region is far below the level seen in the first half of the last decade.

Stolt said the incident, which occurred 75 nautical miles south of Yemen, saw the vessel’s bridge area sustain minor damage from bullets but there were no injuries, no pollution and there was no impact on its cargo.

A coalition warship responded and Stolt Apal has resumed its voyage, the company added. The vessel was reported to be sailing at 13 knots.

The Maritime Security Company said that one skiff was observed following the tanker’s course at a distance of 2 nautical miles.

After adjusting course, a second skiff was seen approaching from a distance of 3 nautical miles at approximately 23 knots.

The armed guards opened fire when one closed to 800 metres from the tanker.

Risk Consultancy Company said that although the nature of the attack remained unclear, it is ninth reported incident in the Gulf of Aden this year.

“This latest incident occurred 58 nautical miles east of a previous suspicious approach where several skiffs were reported to have closed within 1 nautical mile of a vessel transiting westbound”.

The incident is also 117 nautical miles west of a reported attack against a Saudi-flagged vessel.

In recent months, most security attention in shipping has been focused on West Africa after a string of crew kidnappings.