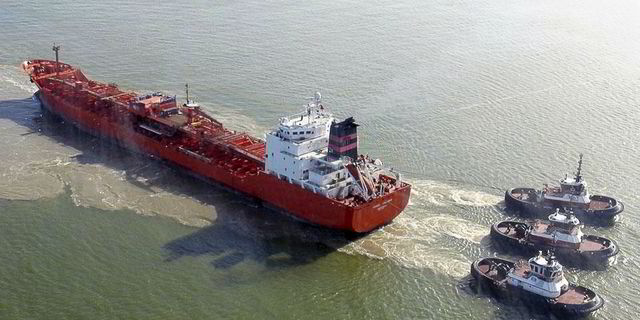 A product tanker reportedly boarded and taken into Iranian waters has connections to a company in hot water for dealings in Iranian oil.

A Hong Kong-flagged product tanker reportedly seized, taken into Iranian waters and released Tuesday has connections to a Chinese company blacklisted by the US government for dealing in Iran’s oil industry.

The 22,400-dwt SC Taipei (built 2000) was boarded by armed men roughly 50 nautical miles (92.6 nautical km) north-east of Fujairah, near the Strait of Hormuz, and held for roughly four hours, according to sources.

It was unclear whether the boarding was an attack on commercial shipping by Iran, as seen last year, or something else.

The news was first reported by a security consultancy, which said that four skiffs carrying armed personnel came alongside and ordered the crew to lower a ladder, then embarked.

Prior to the incident, the handysize tanker had been displaying on AIS that it was destined for Al Jubail in Saudi Arabia.

However, the destination was changed to “Iran”.

Another security consultancy tracked it drifting within 3 miles of the port of Kooh Mobarak, Iran. But it said the ship, which was in ballast, was later released and was heading back to Fujairah.

The SC Taipei was one of three dozen ships connected to Aoxing Ship Management Shanghai, which was sanctioned by the US government in mid-March over allegedly buying or selling petroleum products from Iran.

The ship’s ISM and commercial managers were Aoxing from September 2011 until late March, according to shipping databases.

The SC Taipei’s ISM manager is now listed as “unknown” and its commercial manager SC Shipping Singapore. Emails to the ship’s ownership interests were not immediately returned.

None of Aoxing’s managed fleet was sanctioned, but the Sea Charming’s registered owner, Sea Charming Shipping, was.

The sanctions were the latest move by the US to further its “maximum pressure” campaign on Iran, launched after the US dropped out of the three-year-old multilateral agreement, which saw the Islamic republic scale back its nuclear weapons programme in exchange for lifted sanctions.

Iran’s economy has contracted since, according to the International Monetary Fund, and further destabilised due to Covid-19.

China is Iran’s biggest oil customer, having bought more than $10bn-worth in 2017, representing 28% of all exports, according to trade data from the Massachusetts Institute of Technology.

The US has tried to scale back that relationship, with US President Donald Trump pushing China to buy more US energy, alongside its sanctions regime.