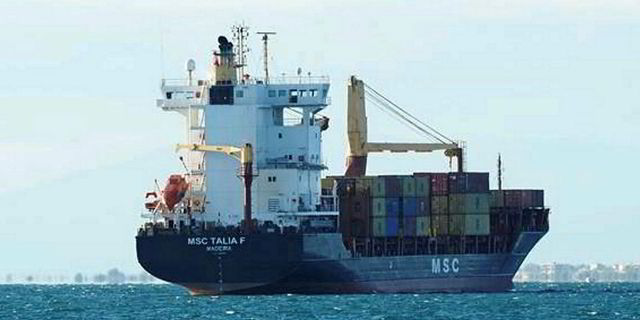 Seven crew members are reported to have been kidnapped from a Greek-owned feeder containership of Gabon in West Africa.

Unconfirmed sources said the vessel involved is the 957-teu MSC Talia F (built 2015), which, according to Clarksons, is owned by Technomar Shipping.

Reports indicate that the Portguese-flagged vessel was boarded early on Sunday in position 0°33’N, 008°25’E.

The vessel, which has a crew of 17, is believed to have been en-route from Lome to Port Libreville at the time of boarding.

“This is the first incident within this area in 2020,” Dryad said. “Within 2019, there were four recorded incidents at Port Libreville and the Owendo Anchorage involving a spate of incidents in December.

“One of those incidents resulted in the kidnapping of four Chinese fishermen and the crew from a vessel transiting from Douala to Port Libreville.”

Earlier this month, a master aboard an unnamed product tanker about 49 nautical miles south-east of Tome reported a skiff following the vessel.

It was said to have contained 10 people, while a weapon was observed in the skiff, according to a recent International Maritime Bureau (IMB) piracy report.

The master was said to have increased speed and commenced evasive manoeuvres, resulting in the skiff aborting the approach.

A security consultancy company argues that West African piracy could rise as states focus resources on the coronavirus pandemic.

“It is expected that Covid-19 will be the defining threat trend of the year, which will shape commercial and security trends within shipping,” it said.

“West Africa is particularly vulnerable to rises in piracy, partly driven by a lack of effective mitigation strategies, and coordinated security responses to piracy and maritime crime remain embryonic across the region.

“Should, as is likely, Covid-19 spread throughout sub-Saharan Africa, overwhelming healthcare systems and becoming most states’ main priority, efforts to mitigate regional maritime crime in West Africa will likely be neglected.”

It said it is unlikely there will be a decrease in piracy incidents and a partial increase is “eminently possible”.

Security consultancy company currently assesses the likely impact of coronavirus on piracy in the Indian Ocean as minimal.

“While there has been an increase in the number of reported incidents in the Gulf of Aden in 2020, none of these incidents have been confirmed as acts of piracy,” it said.

“The spread of Covid-19 throughout the key risk areas in the Indian Ocean is unlikely to significantly alter events or the security picture in the short to medium term.