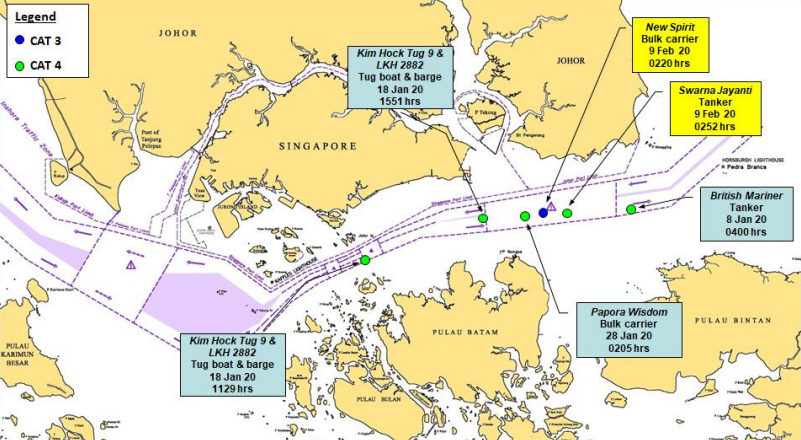 Another two incidents against ships in Singapore Strait

Some engine spares were stolen in one incident, and nothing was reported stolen in the other. There was no confrontation between the perpetrators and the crew.

However, this continues an alarming trend of increased armed robberies against ships in Singapore Strait in 2019.

On 9 Feb 20 at about 0220 hrs, the bulk carrier ‘New Spirit’ was underway at about 5.1 nm from Nongsa Point, Indonesia, when six perpetrators armed with knives were seen in the engine room.

The perpetrators ran onto the deck when they saw the crew.

The master mustered the crew in the bridge and accounted for all of them.

Upon arrival in Singapore, the Singapore Police Coast Guard boarded the ship to conduct further search. No perpetrators were found and nothing was reported stolen.

On the same day (9 Feb 20) at about 0252 hrs, tanker, Swarna Jayanti was underway at about 6.2 nm from Nongsa Point, Indonesia when the crew sighted one perpetrator in the engine room.

The master raised the alarm, mustered the crew and conducted search for the perpetrator.

Some valves (engine spares) were reported missing from the engine room. The master reported the incident to Singapore VTIS East. The crew was not injured.

The ReCAAP ISC issued five Incident Alerts in 2019 and one Incident Alert in 2020 on incidents occurred to ships while underway in the eastbound lane of Singapore Strait.

A total of 31 incidents have been reported in the Singapore Strait in 2019.

Of these, 17 occurred to ships while underway in the eastbound lane of the TSS in the Singapore Strait, and 14 incidents in the westbound lane.

As such, all ships are strongly advised to exercise utmost vigilance, adopt extra precautionary measures and report all incidents immediately to the nearest coastal State.

ReCAAP ISC also recommends to the law enforcement agencies of the littoral States to further step up surveillance, increase patrols and enhance cooperation and coordination among them in order to respond promptly to incidents.