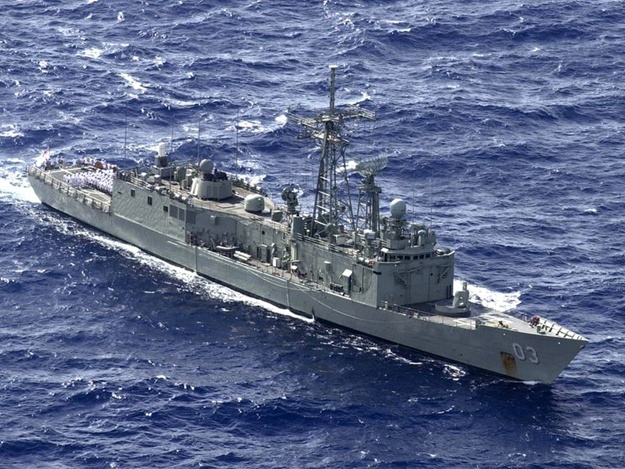 A Japanese destroyer left for the Gulf of Oman on Sunday amid simmering Middle East tension to guard sea lanes that supply nearly all the oil that powers the world’s third-biggest economy.

“Thousands of Japanese ships ply those waters every year including vessels carrying nine tenths of our oil. It is Japan’s lifeline,” Japanese Prime Minister Shinzo Abe told the crew at Yokosuka naval base near Tokyo, before they cast off in a ceremony attended by 500 family members and representatives from the United States, European nations and Middle East.

Abe’s government has said it is prepared to authorize force to protect ships in danger, a controversial decision because Japan’s war-renouncing constitution forbids the use of military force in international disputes.

The Takanami, which will be joined by two maritime patrol planes, will not, however join a naval force led by Japan’s U.S. ally or other naval coalitions in the region.

Tokyo has chosen to operate independently as it navigates disputes in the volatile region. Japan maintains cordial relations with Iran and other countries there and Abe traveled to the region in January to brief Saudi Arabia, the United Arab Emirates and Oman on the mission after earlier speaking with Iranian leaders.

Tension in the Middle East has heightened as friction between Iran and the United States escalated following U.S. President Donald Trump’s decision to pull the United States out of a 2015 international nuclear deal with Iran and re-impose sanctions on it.

The United States has blamed Iran for several attacks on international merchant vessels, including a Japanese-owned tanker, the Kokuka Courageous. Tehran denies the accusation.

In addition to the Gulf of Oman, the Takanami, with 200 sailors and two helicopters, will patrol the northern Arabian Sea and the Gulf of Aden, but will not enter the Strait of Hormuz, a strategically important choke point between Iran and the Arabian peninsula.

The Japanese destroyer will share water in the region with a growing number of warships from other countries, including vessels from the United States, France and Britain.

“Japanese merchant ships were attacked in June, and other nations have increased patrols so Japan too is acting to gather intelligence there,” the mission commander, Captain Yosuke Inaba told reporters before he departed.