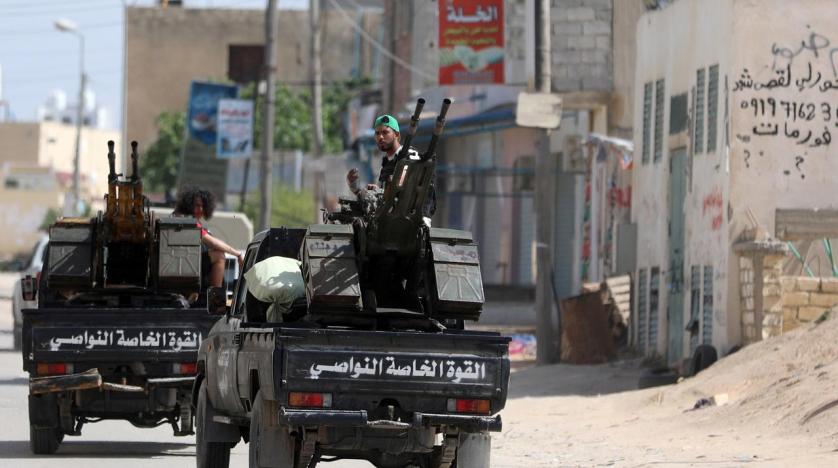 The Libyan National Army (LNA) said its forces secured more advances towards al-Hesha Reserve, south of Misrata, adding that it inflicted heavy losses among the militias.

The navy called on shipping agencies to refrain from sending their commercial ships to those ports.

Earlier, LNA indicated there were 400 Italian soldiers at the air base in Misarta, where the military field hospital is located.

In a brief statement, a prominent military LNA official told Asharq Al-Awsat that there is no ceasefire and the forces will proceed with their battles until the liberation of the capital.

Haftar rejected any ceasefire or truce in Tripoli and confirmed in a statement, distributed by spokesman Major General Ahmed al-Mismari, that the army forces will continue their war against the terrorist groups as classified by the UN Security Council.

The statement noted that it is impossible to establish a civil state unless terrorist groups are eliminated.

Meanwhile, Special Representative of UN Sec-Gen (SRSG) Ghassan Salame said he invited the parties to a political dialogue before the end of this month.

Salame said in a statement carried by Italy’s Aki news agency that he sent two letters to the Tobruk-based House of Representatives (HoR) and the Presidential Council in Tripoli to launch a political dialogue, saying the solution is in the hands of Libyans.

Meanwhile, a high-ranking HoR official, who spoke on condition of anonymity, told Asharq Al-Awsat that “the country’s only legitimate parliament” will not participate in any possible meetings with head of the Government of National Accord (GNA), Fayez al-Sarraj, saying it is “not legitimate or constitutional.”