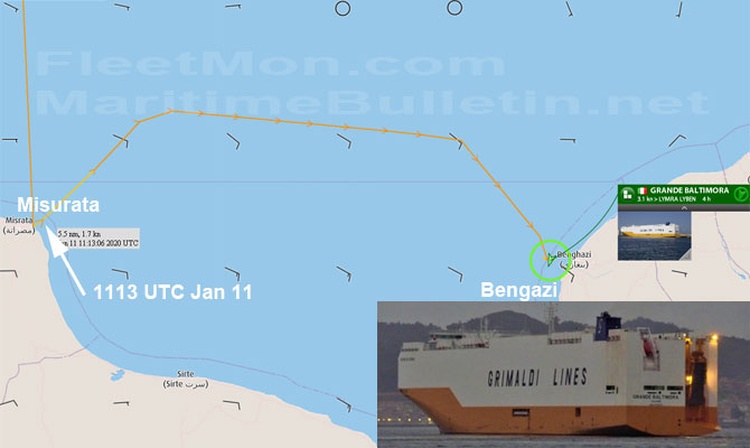 Naval forces of the Libyan National Army (LNA), led by Marshal Khalifa Haftar, opposed to Libyan UN-recognized government, seized Italian cargo ship, according to official LNA statement, released on Jan 12. The ship was en route to Misurata Port, controlled by government. The statement didn’t reveal details or identify the ship, it was said only, that the ship was taken to LNA-controlled Bengazi, she’s to be checked and arrested, if any arms or military equipment found. If there are no arms/ammunition on board, the ship will be released, all cargo bound for Misurata to be offloaded at Bengazi. Crew is interrogated, added LNA representative.
According to available information the ship in question is GRIMALDI’s car carrier GRANDE BALTIMORA, but if that’s the case, the whole story is becoming a riddle. The ship arrived at Misurata from Antwerp on Jan 9, she left Misurata in the morning Jan 11 and sailed to Bengazi, arriving at Bengazi anchorage area early in the morning Jan 12. She wasn’t anchored, and as of 1000 UTC Jan 12 was cruising around.
So if GRANDE BALTIMORA was intercepted and seized, and that’s how it all looks, she couldn’t have on board any cargo bound for Misurata, military or civil, because it was already offloaded. The only likely explanation is, LNA is sending a warning to shipping, ships and owners and shippers, to avoid freight destined for territories, controlled by UN-recognized government.