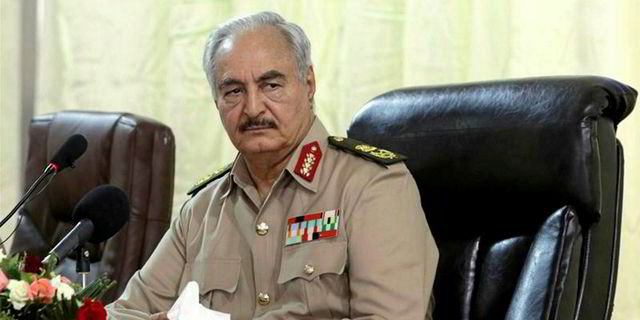 The news came out during cease fire negotiations in Moscow.

A Maritime Security Consultancy is disputing reports the Libyan National Army will attack ships calling on Libyan ports and that it had seized an Italian-flagged vessel.

Maritime Security Consultancy said in a note Tuesday that reports that the Tobruk-based, Khalifa Haftar-led forces would attack ships en route to Misurata and Al Khums were unverified.

“This information is so far unverified by any local intelligence sources, and at this time is single source reporting without substance,” the note read.

The Libyan National Army (LNA) is one of the major sides in a multi-faceted conflict for control of the north African country. On the other side is the UN-backed Government of National Accord (GNA), based in Tripoli.

In April, the LNA launched an offensive to try and topple the GNA.

The two sides were recently in Moscow in an attempt to broker a cease-fire, but Haftar reportedly left the summit to discuss the terms with supporters.

In September, another security consultancy, warned Turkish shipping interests to steer clear of Libya, as the LNA could attack ships given Turkey’s support for the GNA. The LNA had previously taken Turkish seafarers hostage.

The Maritime Security Consultancy also questioned reports that the 62,134-gt car carrier Grande Baltimora (2017) had been seized on a voyage to Misurata.

They did not name the ship, but various media reports cited LNA claims that a ship had been taken and named the Grande Baltimora as the likely candidate.

The Grimaldi Group did not immediately return requests for comment.

“Thus far the credibility of both statements remains in doubt and would not fit with the current narrative of events,” they said.

The firm went on to say that should the cease-fire come to pass, the threat level would be reduced dramatically, though it remains likely fighting will resume.

“In the short term, the LNA’s willingness to consider the proposals form the Moscow talks has reduced the threat across Libya,” Maritime Security Consultancy said.