In its weekly report for 22-28 October, ReCAAP ISC informed of three incidents of armed robbery against ship in Asia. From these, two were reported in the Singapore Strait, including an attempted attack but also a significant incident of physical violence, reiterating recent security concerns in the area. The third one was a least significant incident at Cigading Anchorage, Indonesia.

The first incident involved the Singaporean-flagged bulk carrier ‘Nord Steel’. While underway south of Nipa Transit Anchorage, in the eastbound lane of the Traffic Separation Scheme of the Singapore Strait in the early morning hours of 19 October, the duty oiler sighted five perpetrators armed with gun and jungle knife on deck.

The duty oiler informed the master who raised the general alarm and reported the incident to Singapore Vessel Traffic Information System (VTIS), and the ship manager.

The second incident involved the Singaporean-flagged bulk carrier CSK Enterprise. While anchored at Cigading Anchorage, Indonesia, in the early morning hours of 22 October, the duty officer sighted four perpetrators at the engine room.

The ship whistle was sounded, an announcement was made through the PA system. The perpetrators escaped from the port quarter using a speed boat.

The master organized a security team to patrol the ship and conduct further check to confirm that the situation is safe with no signs of unauthorized persons on board the ship.

The third incident involved the Saudi Arabian chemical tanker ‘NCC Amal’. While underway about 4.9 nm west of Pulau Cula, Indonesia, in the east bound lane of the Traffic Separation Scheme of the Singapore Strait in the morning hours of 25 October, four perpetrators from a small boat attempted to board the ship from starboard quarter.

The alarm was raised and the attempt to board the ship was aborted. The small boat sped away.

The master reported the incident to Singapore Vessel Traffic Information System (VTIS). The ship assumed her voyage with all crew safe. 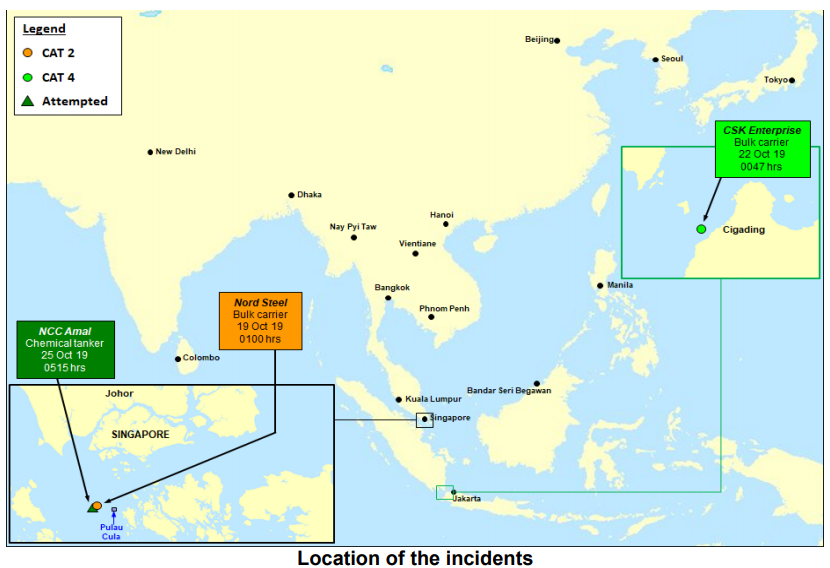 Last week, ReCAAP ISC issued a warning to alert that, during January-October 2019, three incidents of unauthorized boarding of ships in locations of close proximity to each other were reported in the western sector of Singapore Strait. All three incidents occurred to ships of Gross Tonnage between 43,000 and 160,000 while underway in the eastbound lane of the Traffic Separation Scheme (TSS).

In addition, in late August, ReCAAP ISC issued another alert informing that the number of incidents involving tug boats towing barges has seen a rise in the Singapore Strait, with a total of 14 incidents reported only in 2019 (until 15th August).