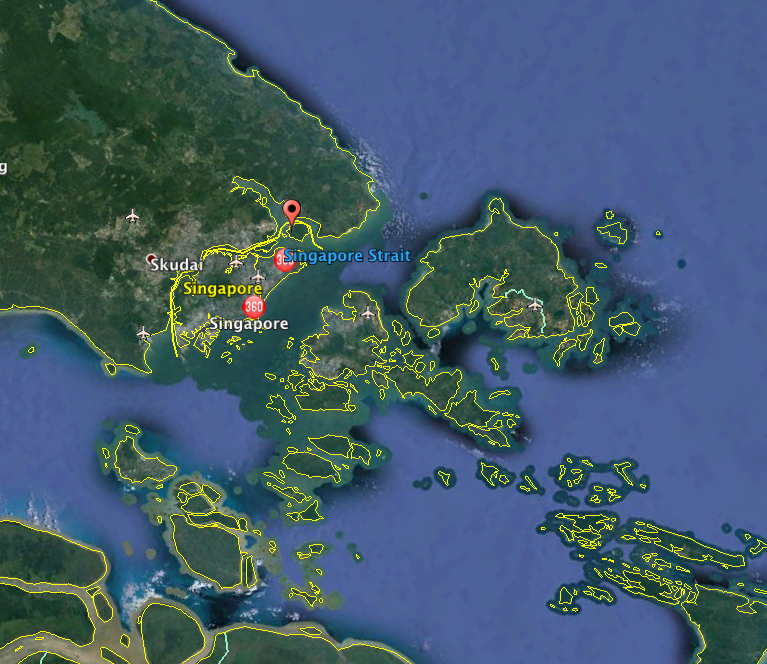 Five intruders armed with knives were spotted in the engine room of a bulk carrier underway at the eastern end of the Singapore Strait.

The intruders escaped after the crew raised the alarm.

A report from the ship’s master said a search of the vessel showed nothing had been stolen.

The incident happened an hour before dawn on November 23.

The bulk carrier had been heading in an easterly direction.

At the time the intruders were spotted, the bulk carrier was 4.4 nautical miles (nm) south of the Malaysian coast and north of Indonesia’s Bintan Island.

There were two reports of intruders boarding vessels in the eastbound lane of the Singapore Strait Traffic Separation Scheme (TSS) in less than 24 hours.

The first incident, on November 23, involved the bulk carrier. The second, less than a day later, saw thieves boarding a barge carrying containers. They escaped after stealing twist locks and ropes.

There has been a spike in reports of intruders boarding vessels in the Singapore Strait in 2019.

There were at least 14 incidents in the first eight months of the year but almost all involved thieves boarding barges laden with scrap metal.

Vessels moving through the Strait should increase watch keeping and lookout for suspicious small boats.

Watches should be especially alert after dark. 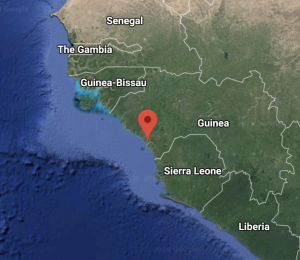 November 21, 01:00 UTC: An unspecified vessel was reportedly boarded by five armed men in an incident classified as a robbery. An investigation is ongoing by locals authorities, but the vessel and crew have been reported safe.

This incident will be updated if/when more information becomes available. 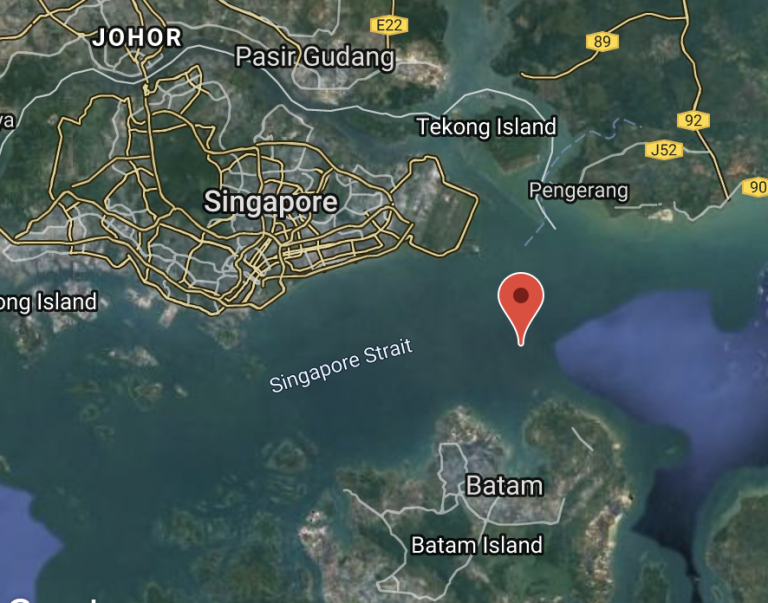 Specifically, according to the company, the attack took place on the Pacific Warden offshore Equatorial Guinea, November 20, at about 0500 local time. At the time, the vessel was assisting with offshore field operations.

Additionally, there were 15 members onboard, from which seven were taken by the attackers and remain missing, whereas the remaining eight are ashore and unharmed.

“The safety of the people on board our vessel is always our top priority. SPO will do everything possible to secure the safe and timely return of the missing crew members, in coordination with their families and relevant authorities.”

For the time being, the company hasn’t issued an additional, updated statement.

Overall, piracy in the Gulf of Guinea has shown an increased level in the past years; Steve Regis, COO, ARX Maritime has stated that the shipping industry should focus more on finding long-term solutions on dealing with piracy on the area and ensure maritime security. In the meantime, a report launched in early 2019 highlighted that Nigeria lost approximately $2.8 billion during 2018, as a result of crude oil and maritime crimes. 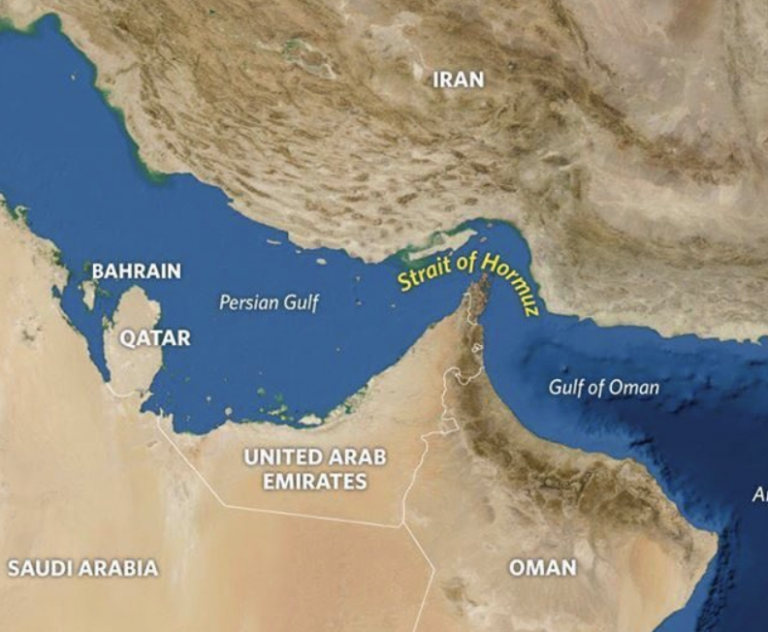 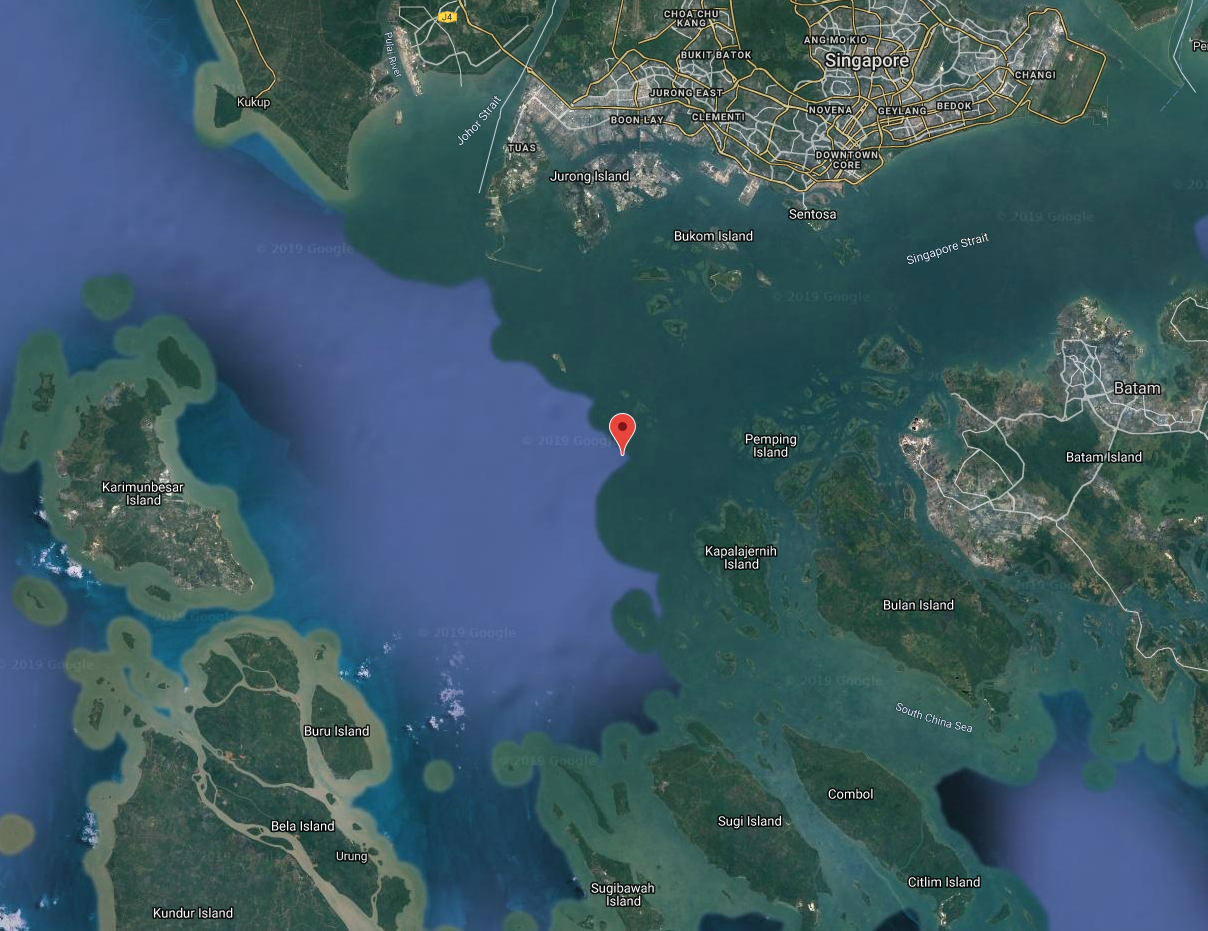 Five robbers armed with knives and crowbars boarded a tanker underway and entered the engine room. Duty Engine crew noticed the robbers and raised the alarm, resulting in the robbers escaping without stealing anything. Incident reported to Singapore VTIS. 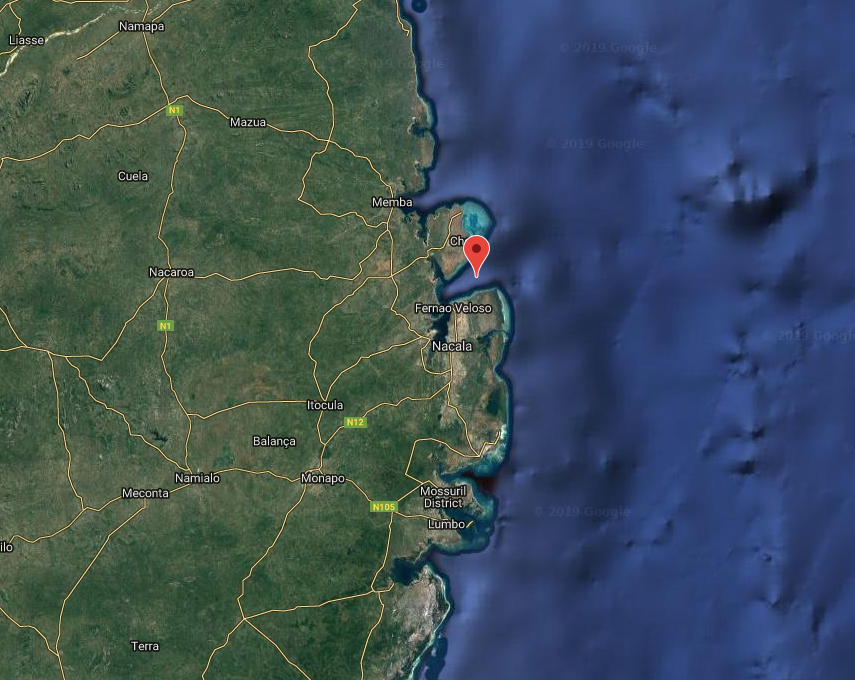 Duty crew onboard an anchored bulk carrier noticed an unauthorised person on the forecastle deck and raised the alarm. Crew mustered and a search carried out. Seeing the alerted crew the person escaped. Nothing reported stolen. All crew safe. Incident reported to Port Control. 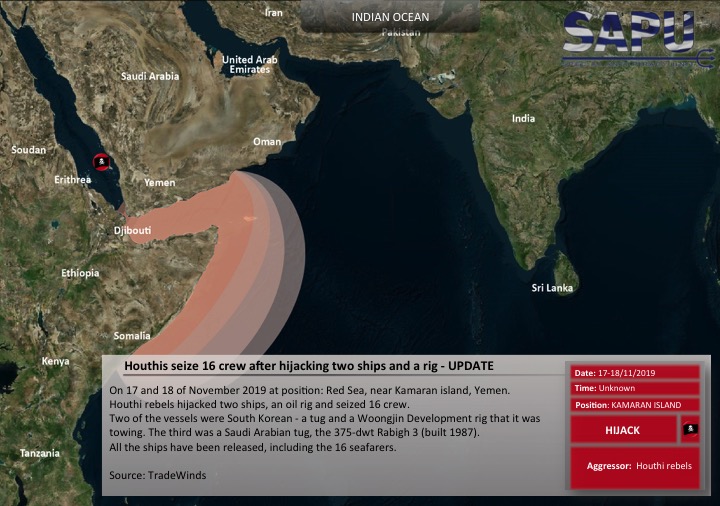 South Korea says two of its citizens among those freed by Yemeni group.

Houthi rebels in Yemen have released 16 seafarers seized during the hijacking of two vessels and a rig in the Red Sea this week.

South Korea’s foreign ministry said on Wednesday two of its citizens were among those detained by the Houthis for allegedly violating their territorial waters, the Yonhap news agency reported.

South Korea said all the ships had been released.

They are heading to Jizan in Saudi Arabia, where they will arrive on Friday.

The Houthis had earlier said they were willing to release them once they confirmed they were not related to the “countries of aggression,” which include Saudi Arabia.

Togolese President Faure Gnassingbe has stated that West African states’ failure to coordinate their response to piracy off their coastline is the reason why attacks are still apparent.

Bloomberg reports that while the 15 states and western partners signed a pact in 2013 to collaborate in the fight against piracy, the region still accounts for 40% of the world’s reported incidents.

What is more, ICC, IMB published a report on piracy and armed robbery in the timeframe from January 1 to June 30, 2019. Based on the report, the seas circling West Africa are the most dangerous for piracy, as of the 75 seafarers taken hostage onboard or kidnapped for ransom worldwide so far this year, 62 were captured in the Gulf of Guinea – off the coasts of Nigeria, Guinea, Togo, Benin and Cameroon.

In an interview with Bloomberg Television in Lome, Gnassingbe said that Togolese forces typically pursue pirates in their own waters, with a coastline of almost only 50 kilometers (31 miles), they need to hand over to a neighboring state to continue the chase, adding that.

“Where we are a little bit weak is how to cooperate. We need to cooperate and take some measures.”

Additionally, BIMCO’s Head of Maritime Security, Jakob P. Larsen, has highlighted that there’s no reason to ‘turn a blind eye to piracy’ in the Gulf of Guinea. He supports the establishment of a contact group to fight piracy in the Gulf and protect the shipping industry.

According to Bloomberg, while Gnassingbe said the reforms have addressed the cause of the protests, the  head of the Togolese Civil League, Farida Nabourema, described them as “surface” steps that were aimed at “setting the clock back to zero.”

Togo which holds a $5 billion economy which derives most of its income from agriculture and mining, is implementing regulatory reforms to reduce public debt and lure investments.

Gnassingbe further commented that over the next year, the government will seek to strengthen the judiciary to help with business processes and further implement digital platforms for the administration of taxes and payments.

Further to this, in January, the United Nations Secretary General’s office launched the ‘Activities of the United Nations Office for West Africa and the Sahel’ report, focusing on Nigeria loosing approximately $2.8 billion during 2018, as a result of crude oil and maritime crimes. Maritime crime, including piracy, dominated in the coast of West Africa and posed a big threat to peace and development in the region.

In June, members of the shipping community, Flag States and Agencies from Gulf of Guinea gathered at the IMO Headquarters for a day-long on Maritime Security in the Gulf of Guinea. Opening the symposium, Dr. Grahaeme Henderson, Chair of the UK Shipping Defence Advisory Committee and Vice President of Shell Shipping & Maritime, stated that the high level of piracy and armed robbery attacks in the Gulf of Guinea is not acceptable. However, such phenomena are taking place on a day to day basis, and urgent action is necessary.