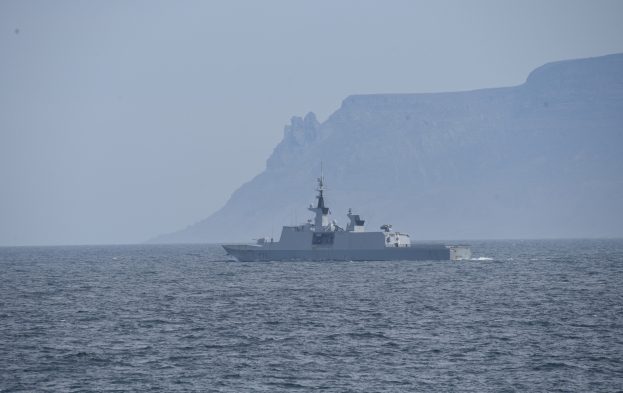 The FS Surcouf has supported Operation Atalanta in the past, including deployments in 2011, 2012, 2013, 2017 and 2018. In total, France has contributed almost 20% of Operation Atalanta’s naval assets since the beginning of the operation in 2008.

The FS Surcouf is a La Fayette-class frigate, a multi-role frigate that is able to integrate within an international task force or operate on her own in crisis situations. Her detection capacities can be enhanced by boarding a helicopter.

The operational skills of this class of French destroyers have been demonstrated in recent operations such as:

The FS Surcouf was admitted to the French Navy in 1997. She measures 125m in length, 15m in width and weighs approximately 3750 tonnes. The FS Surcouf’s crew is composed of 150 members: 13 officers, 85 non-commissioned officers and 52 sailors.

EU NAVFOR’s force assets change frequently due to the constant rotation of units, and vary according to the monsoon seasons in the Indian Ocean and other external factors. However, EU NAVFOR typically is composed of approximately 600 personnel (1–3 Surface Combat Vessels and 1-2 MPRAs). For more information about currently deployed assets, please see our Deployed Units.

While EU NAVFOR Operation Atalanta is a European Union Defence operation and consistently benefits from EU member state contribution and support, participation in EU NAVFOR also goes beyond EU Member States.
Norway was the first non-EU country to contribute to the Operation, with a warship in 2009. Thereafter, Montenegro, Serbia and Ukraine have provided staff officers to the Operational Headquarters (OHQ) and Force Headquarters (FHQ). Ukraine contributed a warship early in 2014, and New Zealand contributed an MPRA asset later the same year.

In addition to EU NAVFOR units, a considerable international military maritime presence is deployed in the high-risk area, including the Combined Maritime Forces (CMF, 33 Member States) which maintain close coordination with China, India, Japan, Korea, who also operate independently in the area. In particular, China, India and Japan have supported Operation Atalanta by protecting WFP vessels upon coordinated request by Atalanta. All these units remain committed to counter-piracy, but with varying mandates and mission objectives. EU NAVFOR maintains close liaison with these forces to co-ordinate activities within the Area of Operations. EU NAVFOR’s Maritime Security Centre Horn of Africa (MSCHOA)supports these nations operating independently by informing the shipping industry on escort opportunities.