In its weekly report for 21-27 May, ReCAAP ISC reported two incidents of armed robbery against ships in Asia. The one of them is Category 4, which means the perpetrators were not armed, and the crew not harmed, but the other one was a Category 2, which means a moderately significant incident, with crew held hostage. Both incidents occurred in Indonesia.

While underway, four perpetrators armed with long knives boarded the ship. The perpetrators entered the cabins of the master and an A/B and tied them up.

They then stole cash and personal effects of the master and A/B, cut the Inmarsat Telephone line and escaped.

“This is the first Category 2 incident reported in 2019 which involved the crew being held hostage by perpetrators armed with knives.”

The Category 4 incident occurred at Lubuk Gaung anchorage in Dumai on 11 May, involving the Hong Kong-flagged bulk carrier ‘Princess Paula’.

While at anchor, the 3rd Engineer of the bulk carrier discovered that the spare part room in the main engine room had been broken into. Some engine spares were stolen.

The master raised the alarm and a search was conducted. The crew was not injured. 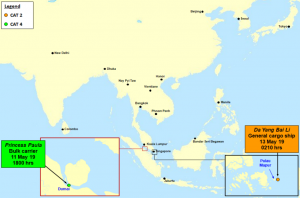 Status of abduction of crew in the Sulu-Celebes seas

Based on the latest report from the Philippine Focal Point, no crew remains in captivity.

The rescue and release of the abducted crew is the result of the intensified military and law enforcement operations of the Philippine authorities, ReCAAP ISC noted.

“As the threat of abduction of crew in the Sulu-Celebes Seas and waters off eastern Sabah remains, ReCAAP ISC maintains its advisory issued via the ReCAAP ISC Incident Alert dated 21 Nov 16 to all ships to reroute from the area, where possible. Otherwise, ship masters and crew are strongly urged to exercise extra vigilance while transiting the area, and report immediately to the Operation Centres of Philippines and Eastern Sabah Security Command (ESSCOM) of Malaysia.”