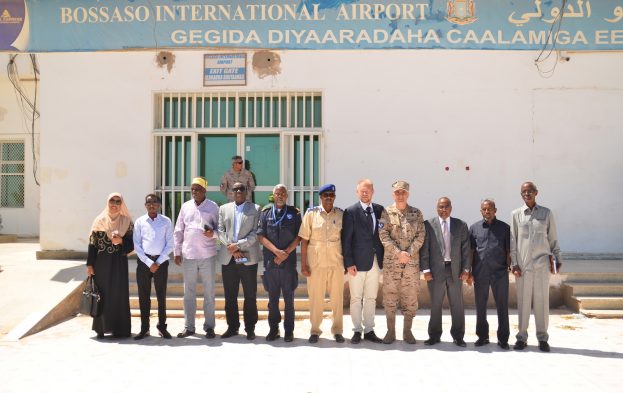 On 25th March 2019, a delegation from EU NAVFOR together with EUCAP Somalia met in Bossasso with the Puntland Minister of Ports and Maritime Crime Prevention, Mohamed Abdi Osman, to exchange views on the security situation at sea and to identify opportunities for further collaboration and cooperation. The Minister was accompanied during the meeting by his Deputy Minister, the Governor of Bari, the Mayor of Bosasso as well as representatives from the Bosasso Port Maritime Police Unit as well as the Puntland Maritime Police Force.

The Force Commander of Operation ATALANTA, Rear Admiral (ES Navy) Ricardo Hernandez together with the strategic advisor of the EUCAP Somalia Field Office Garowe, Mr. Aaro Suonio, congratulated the Minister on his assignment and confirmed the intent to continue with the close relationship.  Located at the Horn of Africa and the Gulf of Aden, Puntland is a key partner for EUCAP Somalia to enhance maritime law enforcement capabilities such as the Bosasso Port Maritime Police Unit or the Joint Maritime Information and Coordination Centre (JMICC), providing accurate information and response options to the Puntland Authorities with regard to maritime security and safety related issues.

EU NAVFOR continues to operate in the Gulf of Aden and the wider Western Indian Ocean to allow the free flow of commerce to flourish. During the course of counter-piracy operations, EU NAVFOR regularly interacts with local security forces such as the Puntland Maritime Police Force, the Bosasso Port Maritime Police Force and local authorities from coastal communities to better assess the situation at sea.

During the meeting Rear Admiral Ricardo Hernandez stated that EU NAVFOR remains committed to play its part in the wider regional maritime security architecture to protect the free flow of commerce. He stated that: “What we see in Bosasso here today is testament to the efforts of Somali authorities to enhance maritime security. I will continue to interact closely with regional authorities and regional forces to ensure that maritime trade continues.”

The European Union has provided strong support in the maritime domain through security, capacity-building and various economic development programmes. By means of example EU NAVFOR supported the implementation of a UNFAO project financed by the EU aimed to enhance the capacities of fishing communities along the Somali coast including Puntland in October 2018 whilst EUCAP continues to work closely with the United Nations Office on Drugs and Crime (UNODC) to train local security forces.