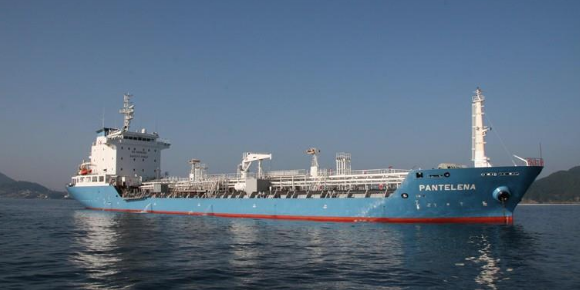 Georgian master says crew was held for nine days off West Africa before being released.

The master of a Greek tanker that dropped off radars in West Africa has confirmed it was hijacked.

The 10,700-dwt Pantelena (built 2006) disappeared on 14 August off Gabon but was spotted last Thursday off Congo, with the Centre Regional de la Securite Maritime de l’Afrique Centrale (CRESMAC) saying the ship had lost contact due to inadequate technical equipment.

Missing Greek tanker spotted off Congo
Read more
But the Tass news agency cited captain Lasha Gadelia as telling Georgian state television that the two Russians and 17 Georgians on board had been released after being captured by pirates.

“In the early hours of August 14, the tanker was captured by pirates, who held the crew for nine days,” he said.

“At that moment, my assistant was steering the vessel. They threatened him with firearms, and, after that, the tanker was hijacked. The pirates locked the crew in one of the cabins, where they were held for nine days.

“The pirates did no physical harm to the crew and gave them food and water from time to time,” he added.

The captain said the ship and its crew were released on 23 August, but did not elaborate on how.

The Russian embassy in Gabon told Tass that the condition of the Russian members of the crew was good and they have already contacted their relatives.

“The issue of returning them to their homeland as soon as possible is now being studied,” the embassy said.

The Russian diplomatic mission added that “the reasons why the ship went off radar screens is still unknown.”.

Owner Lotus Shipping of Greece has not responded to TradeWinds’ request for comment.