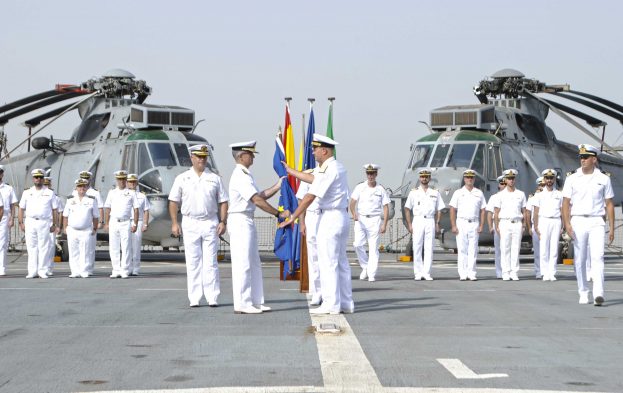 In April ESPS Galicia responded to a Mayday call from a merchant ship, MT Costina, after the vessel was attacked by a number of armed men in a fast-moving skiff. When the armed men became aware that ESPS Galicia was fast approaching, they broke off the attack and the vessel and crew remained safe.

In May ESPS Galicia also had the privilege to host the Somali Prime Minister as part of the EU Day commemorations off the coast of Mogadishu.

At today’s handover ceremony Rear Admiral Fernández-Pintado expressed his appreciation and thanks to the men and women deployed with EU NAVFOR:

“First of all, it has been a great honour for the Spanish Navy, and myself in particular, to have commanded the Force headquarters of the European Union Naval Force Somalia. I am truly grateful to the national and EU authorities for the trust and confidence they placed in me. Throughout this rotation we have succeeded in performing our main task of protecting World Food Programme vessels carrying humanitarian aid to Somali ports. We have also, through sea and air patrols, continued to put pressure on pirates and denied them opportunities to attack vessels. I have also been very impressed by the close relationship and the coordination of effort with the other counter-piracy commanders, which included the integration of ROKS Choi Young into EU NAVFOR and collaboration with the Chinese PLA Navy to escort a WFP vessel in the Somali Basin. All these key elements have contributed to our continuing 100% success of having no vessels being held by pirates off the Somali coast.  Fabio, I know you and your team will work relentlessly to ensure that there continues to be no hiding place for would-be pirates. I wish you and your team the best – fair winds and following seas.”

Rear Admiral Gregori stated: “Under my command EU NAVFOR crews will continue the excellent work achieved by the 25th rotation.  By working with our EU colleagues, other counter-piracy task forces, independent deployers and regional states, we will play our part to help keep the waters of the Gulf of Aden and Indian Ocean safe for seafarers.”

Rear Admiral Gregori and his Force HQ staff will be aboard the Italian Navy warship, ITS Fasan for over 4 months.