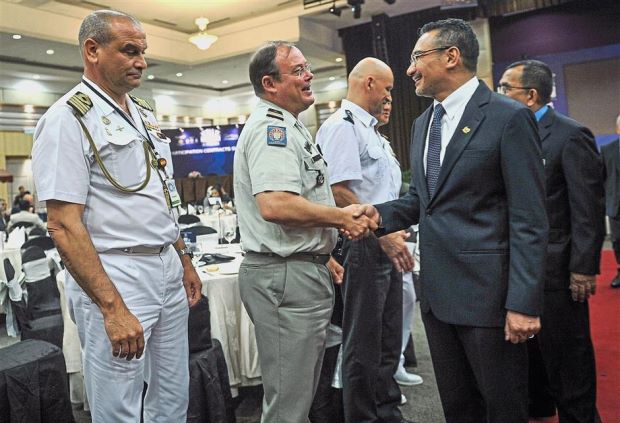 “The idea of IS setting up base on local shores is a very real possibility, judging from the Marawi incident,” he said.

The Defence Minister said the patrols on the Sulu Sea would certainly be more successful with the participation of the two countries.

“The idea to include (Singapore and Brunei) was proposed a while ago,” he told a press conference after launching the Defence Services Asia (DSA) 2018 exhibition and conference yesterday.

“While there is no decision from both countries yet, my counterparts sounded positive the last time I spoke to them.”

Hishammuddin added that the main objective of TMP, which was launched last month, was to ensure that militant threats such as Islamic State do not use the Sulu Sea as their route to Malaysia and neighbouring countries.

“The TMP was also launched to combat sea piracy, kidnapping and armed robbery. It’s quite significant.

He added that on top of maritime rounds, the Armed Forces will soon conduct air patrols as part of TMP activities.

Hishammuddin, who is also Minister with Special Functions in the Prime Minister’s Department, said all 10 Asean Defence Ministers should gather in Manila to be briefed on what was happening in Marawi.

It will be held from April 16 to 19 next year at the Malaysia Inter­national Trade and Exhibition Centre here.

“In previous years, the event was held at the Putra World Trade Centre,” he said.

Among the highlights of the event will be a forum on chemical, biological, radiological and nuclear weapons. Cybersecurity and cyberdefence conferences and demonstrations are also planned, as well as a terrorism-themed security conference.

Hishammuddin said that since its inception in 1988, DSA has provided a consistent platform for governments and military outfits to come together and strengthen relations in the interest of promoting greater international cooperation.

“DSA has also been crucial in addressing security concerns, including counter-terroism, cybersecurity, humanitarian assistance and disaster relief,” he said.

Next year’s DSA will be held alongside the National Security Asia 2018 international exhibition.