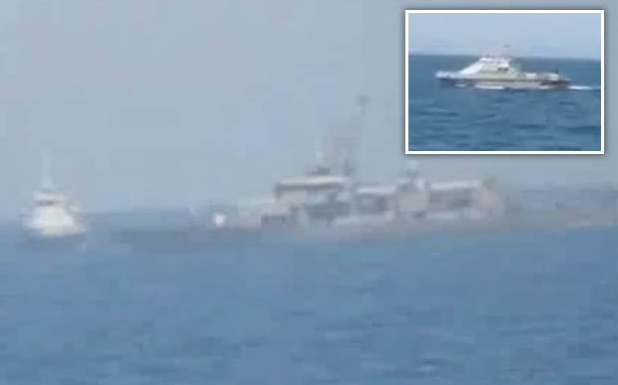 The USS Thunderbolt fired multiple warning shots at the vessel when it came within 150 yards, in the Persian Gulf yesterday (July 25).

US Defence officials said the boat was operated by the Iranian Revolutionary Guard Corps.

It had approached the ship at a high speed despite warnings to stop including voice communications and sound signals.

In footage now released by the US Navy, a round of shots are heard being fired in the direction of the small boat.

The clip then cuts to another Navy vessel next to the Iranian ship.

A crew-member urgently calls in the details to his superiors about the stand-off.

It wasn’t until shots were fired that the vessel finally halted its approach, but still “lingered” in the area.

“The Iranian vessel did not respond to repeated attempts to establish radio communications as it approached,” US Naval Forces Central Command said in a statement.

“Thunderbolt then fired warning flares and sounded the internationally recognised danger signal of five short blasts on the ship’s whistle, but the Iranian vessel continued inbound.”

The incident will only raise fears of a potential conflict between the two countries, after White House adviser Rudy Giuliani warned the Iranian regime poses a bigger threat to the world than North Korea.

Last month, an Iranian vessel aimed a laser at a US helicopter in the international waters of the Strait of Hormuz in what was called “unsafe and unprofessional”.

And in January, Navy destroyer USS Mahan fired a burst of warning shots at four Iranian craft that were approaching at high speed.