Nick Roumpis examines a worrying development – increasingly ferocious attacks on ships that are not so much piracy as maritime terrorism.

Piracy levels are at their lowest level since 1998, but a disturbing new form of piracy appears to be emerging.

A series of intensely violent attacks in the High Risk Areas (HRAs) of the Middle East and Philippines have been christened “maritime terrorism”. But the shipping industry does not yet seem to have woken up to the emergence of this threat.

An attack on a Greek-owned tanker last spring highlighted the worrying implications of this phenomenon, and it is not the only incident to have raised eyebrows within the maritime security industry.

It could have been just another day at work for the security team of three commandos on the 8,900-dwt Fair Apollon (built 2009), as the job requires them to be ready to face the unexpected, but this was to be no normal day.

No one can feel entirely safe on a ship anchored 30 nautical miles off the Yemeni port of Mukalla, where low-flying military planes and exploding bombs are commonplace, but when a small skiff approached the Fairdeal tanker on the night of 19-20 April 2016, nothing seemed particularly unusual.

The armed guards on the vessel were changing shifts when they noticed the small boat. They had seen such vessels passing by many times in the area, but kept a routine eye on the skiff’s approach.

The craft had been moving slowly, but all of a sudden it picked up speed, coming much closer to the ship. At 200 metres its crew began firing automatic weapons at the tanker.

Under heavy fire reaching the Fair Apollon’s bridge, the team leader and his deputy took cover. The crew retreated to the citadel and the third guard joined his comrades. They split their equipment and rushed to the vessel’s wings.

Then the third commando raised the alarm that a second skiff was launching an attack on the other side of the tanker. The situation did not look good. Fifteen minutes of continuous exchange of fire followed.

Alexandros Theodosios Kontos, chief operating officer of LSS-SAPU, the private maritime security company onboard the Fair Apollon, tells TW+: “At this stage one’s military training in the Special Forces and maritime security kicks in — along with the survival instinct.

“Fifteen minutes of a gunfight feels to many, if not most, a lifetime. This is exactly what commandos are trained for.” But he adds: “Even some commandos may find incidents like this ‘too much’, as they have families and kids.”

The skiffs kept manoeuvring and firing towards the ship over the duration of the attack. Small, single-engine skiffs can be difficult to confront: their flexibility means armed guards have to take extreme care about every move they make, keeping themselves covered but taking the necessary action to deter the attack.

“It is exactly this moment you need a well-trained commando instead of just any security guard — to protect himself, his team, the crew and the vessel,” Kontos says.

Following heavy gunfire from both sides, the assailants gave up their effort to take over the ship. Most importantly, nobody was hurt. “Luck was on our side, as this could have turned bloody,” Kontos adds.

Commandos on commercial ships are trained to be ready for such incidents but they definitely don’t expect to be involved in quarter-hour gun battles.

Kontos says: “Our commandos had never faced such an attack. The way the assailants approached the Fair Apollon raised suspicions that this was not a typical pirate attack. The method of the attack was nowhere near Somali piracy tactics.

“We now understand this was the first maritime terrorism act in the HRAs in recent times against a merchant vessel.”

The raid on the Fair Apollon came after a series of kidnappings in Philippine waters by Abu Sayyaf, a military group with alleged ties to Al-Qaeda.

It was followed by an attack with rocket-propelled grenades and AK47 automatic rifles on a Korean ship in the Red Sea and another assault on a Teekay tanker.

During the latest incident, the assailants deployed a skiff containing what Teekay describes as “a substantial amount of explosives” that detonated 20 metres from the 138,000-cbm Galicia Spirit (built 2004), setting a precedent for attacks against commercial ships. 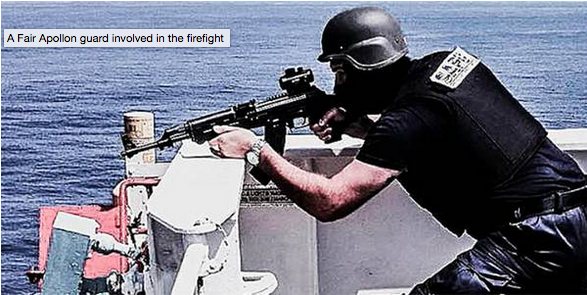