Concern is mounting over weapons that are allegedly being loaned unlawfully between security companies providing armed escorts on ships, increasing risks for shipowners and operators.

Documents seen by TradeWinds appear to show regulations are being broken, although the situation remains clouded because laws, rules and enforcement differs between countries and flags.

Breaching weapons’ end-user certificates (EUC) can invalidate vessel insurance and could lead to ships being delayed or detained.

Shipowners’ association Bimco has told members of its serious concerns over the loan of weapons and has urged owners to scrutinise contracts when employing armed guards.

It is also calling on flag states to verify the authenticity of weapons’ EUCs.

Bimco says it has become aware of certain private maritime security companies (PMSCs) using weapons that are “rented” or “borrowed” from other PMSCs, an unlawful practice because “the weapons are not legitimately licensed to the end user”.

Such practices are likely to have been fuelled by the tough commercial conditions in the private security market, which has been squeezed by the decline in threat levels and cost-cutting by shipowners.

Documents seen by TradeWinds indicate that the practice has been going on for at least three years, suggesting efforts to stamp it out have been ineffective.

Among those identified in the documents is UK-based Corinthian Protection International. It allegedly leased three weapons to Triaena Maritime Security, which placed them onboard the 73,672-dwt Horizon Diana (renamed Lake Trout, built 2007) in August 2014.

The weapons were included in Corinthian’s standard individual export licence, issued by the then UK Department for Business, Innovation & Skills (BIS), which had an expiry date of 17 May 2014.

According to the licence: “Corinthian is to be informed that … none of the arms referred to in this application are to be re-sold, nor donated or loaned to any other entity and that Corinthian Protection International are to retain ownership at all times.”

BIS told TradeWinds that HM Revenue & Customs (HMRC) is the enforcement authority for export controls. HMRC did not respond to TradeWinds’ request for comment. It is understood that UK authorities were notified about Corinthian last year.

The Security in Complex Environments Group (SCEG), an industry group working with the UK government on security issues, said it “expects all PMSCs to be fully compliant with international and domestic legislation including trade licences”.

Calls to the contact number on Corinthian’s website went unanswered, and e-mails to Corinthian failed to send. Triaena did not respond to requests for comment by phone or e-mail.

TradeWinds has also seen a “protocol of ammunition consumption”, which suggests the same weapons owned by Corinthian were used by Triaena on the 299,999-dwt tanker Boston (built 2012).

Both ships were then flying the Liberian flag. The Liberian Registry said: “As such, and in response to this, we have reviewed our procedures and the recent cases of use of armed guards on Liberian ships.

“We have implemented certain controls that allow us to monitor the practice to help ensure that illegal leasing is not being employed.”

One shipping company involved in Triaena’s protocol of ammunition consumption said it would check its records.

Following TradeWinds’ investigation, it is understood the same company asked PMSCs to ensure that the serial numbers of their weapons are included on their EUCs. It now also checks that the end-user company is the same as the contracting outfit on its Guardcon contract.

Cyprus has certified Triaena for some years and the company is included in its most recent list of certified PMSCs, published in August.

Cyprus’ Department of Merchant Shipping tells TradeWinds that it monitors PMSCs only for activities on Cyprus-flag ships.

In another case, four weapons appear to have been leased between two PMSCs, but those involved argue the equipment and entire operation was subcontracted and, hence, entirely lawful.

“The attached contract is a very clear contract… to provide weapons, equipment and personnel for a sub-contracted task,” one of the companies explained.

However, Elinor Dautlich, a partner at Holman Fenwick Willan and member of Bimco’s Guardcon sub-committee, told TradeWinds that even in such cases the validity of application of licences could be questioned.

“Assuming the export control legislation of Greece and Cyprus does broadly reflect that of the UK, where Company B deploys maritime security officers [MSOs] carrying controlled goods belonging to Company A — irrespective of the fact that they are carried by MSOs from Company A — Company B cannot rely on Company A’s licence and will almost certainly not itself hold a valid licence, Dautlich said.

“In such circumstances, apart from the breach of contract resulting from such an arrangement and the risk of enforcement activity faced by Company A and Company B in their place of incorporation, there is also a risk that the ship may be detained by port state or coastal state and/or that Company B’s insurances might not respond in the event of an incident.”

Bimco maritime security manager Philip Tinsley said: “These actions are illegal under most jurisdictions and have the potential to cause serious financial and reputational risk to any shipowner who allows this practice to occur.

“More seriously, the shipowner or charterer could be breaking the law if an incident occurred which was subsequently followed up in a court of law by a claimant.”

Chris South, deputy director at the West of England P&I Club, said: “The problem for owners is that the security companies are registered and operate under several different legal jurisdictions.

“Whether a shipowner is acting themselves illegally — if a security contractor is using illegally sub-leased firearms — will of course depend upon the laws of the flag state. The key is for owners to carry out thorough pre-contractual due diligence with the chosen security company.”

Tinsley added: “Bimco are an advisory body and not policemen of the oceans.

“Unfortunately, there are a number of organisations, including PMSCs, armouries and agents, who are either not aware of the correct and legal procedures or, who are prepared to disregard them to cut costs.”

The Marshall Islands Registry said: “Industry has been aware for some time that the illegal leasing and sub-leasing of firearms is taking place.

“The Administrator has not received or seen any requests that would suggest this. However, given our involvement at the International Maritime Organization, we are aware that discussions on this topic are ongoing.”

Last week, in response to growing concern over weapons sharing, Djibouti launched an online platform for shipping companies and flag states to check the end-user certificates of PMSCs. 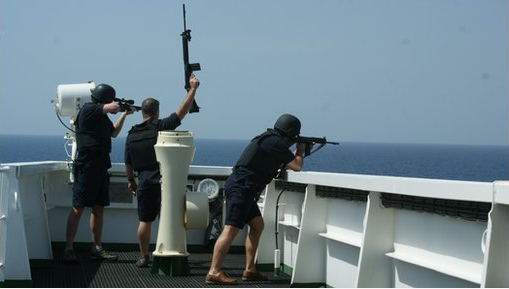