An armed perpetrator attempted to board the Panamanian-flagged chemical/oil product tanker Au Libra while at anchor off Batangas, Philippines, in the early morning hours of 23 March.

ReCAAP ISC informed of the incident in its weekly report for 31 March -6 April.

While at anchor at 2.55 am, the duty crew noticed movement at the forecastle deck.

He then saw a perpetrator with a knife climbing through the starboard anchor cable of the ship.

The duty crew informed the Officer on Watch, raised the alarm on PA system and mustered the crew.

Upon seeing the approaching crew, the perpetrator jumped into the water immediately; and escaped together with another person who was waiting in a small boat.

The crew conducted an inventory of the ship’s properties, and there was nothing stolen. 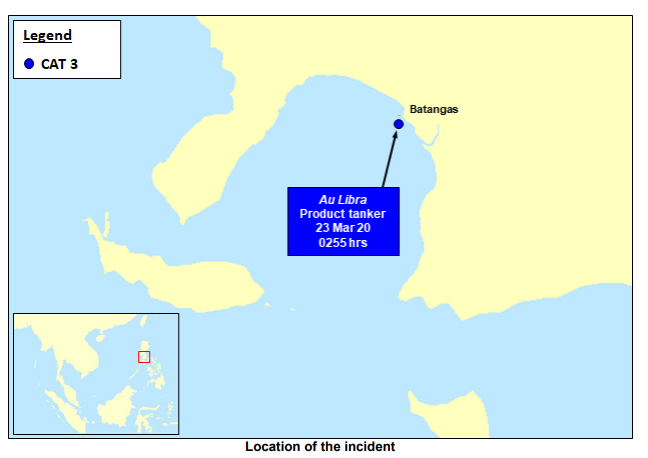 This was a CAT 3 incident, which is ‘less significant’ in nature. Under this category, perpetrators carry weapons, but there is no physical harm to the crew.

The ReCAAP ISC urges ship master and crew to report all incidents of piracy and armed robbery against ships to the nearest coastal State and flag State, exercise vigilance and adopt relevant preventive measures taking reference from the Regional Guide to Counter Piracy and Armed Robbery Against Ships in Asia,