Limited protection from swapping UK flag in the Strait of Hormuz

From my time as a Royal Navy officer navigating the busy shipping lanes of the Strait of Hormuz, I recognise the challenges of operating in this chokepoint.

Each day, many of the largest ships in the world sail at speed through the two-mile-wide (3.2-kilometre) traffic separation lanes, while a multitude of smaller trading and fishing dhows travel in all directions and swarms of speedboats (many apparently engaged in smuggling) cut close ahead and astern of larger vessels.

To add to this complex navigational picture, simmering international tensions leave crews constantly trying to determine whether any of the many contacts are a risk to their vessel. 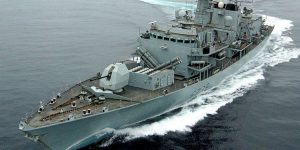 But the situation has not improved, bearing in mind the number of warships that Britain’s Royal Navy can sustain on escort duties and the political tensions demonstrated by earlier attacks on vessels in the Strait of Hormuz.

However, those with contracts of affreightment to service or other charter commitments to or from ports in the Middle East Gulf need to examine their options carefully.

HMS Montrose is one of only two UK warships protecting British ships transiting the Strait of Hormuz Photo: Wikipedia
Since six tankers were attacked in May and June, the question of whether an owner could refuse to comply with a charterer’s orders because compliance would require passage of the strait has been widely covered.

Strait of Hormuz redesignation could hike crew wages
Read more
At the time of writing, and subject to the drafting of the particular charter, the common view, whether under a war risks clause, unsafe port or by frustration, is: probably not.

The attacks in May and June had a broader international dimension. But the experiences of the Stena Impero and the 158,000-dwt British Heritage and 315,800-dwt Mesdar (both built 2017), which were approached by Iranian armed speedboats in international waters in the Strait of Hormuz last month, represent a targeting of vessels with UK connections — either a British flag or manager.

A number of owners/operators of UK-flag vessels that are required to sail through the strait have been considering their choice of flag, including whether it is possible to operate temporarily under a different flag.

A vessel cannot sail under the flag of more than one state at a time.

For some owners, this may offer a suitable means of reducing a perceived temporary, heightened risk associated with the UK flag. It is not, however, a “one size fits all” solution.

The owner (and the bareboat charterer) will have to satisfy the preconditions of both ship registers, which will include obtaining the prior consent of any mortgagee of the vessel.

Additionally, the owner will need to consider the impact that suspending the British flag might have on its ability to take advantage of certain tonnage tax regimes.

Furthermore, events in the strait have demonstrated an alarming willingness by Iran to interfere with vessels on innocent passage, and owners will have to question the practical benefit of changing flag by way of bareboat charter registration.

Also, in some instances, third parties can readily discover the underlying flag by paying a fee to the bareboat charter registry.

The UK Ministry of Defence says “the Royal Navy has been tasked to accompany British-flagged ships through the Strait of Hormuz … should sufficient notice be given of their passage”. The warships HMS Montrose and HMS Duncan are now protecting British vessels transiting the waterway.

In some quarters, this might be seen as closing the stable door after the horse has bolted. However, the intervention by the HMS Montrose while escorting the British Heritage last month demonstrated the value of an effective naval escort.

Not all flag states will be able to provide naval escorts to vessels flying their flag.

Given the broader international character of previous attacks, the potential for tensions in the region to escalate and the Royal Navy tasking (if it can be maintained), owners and operators of UK-flag vessels may conclude that the risk of sailing through the strait under the British flag does not, on balance, justify reflagging their vessels.