The ReCAAP ISC published the Guidance on Abduction of Crew in the Sulu-Celebes Seas and Waters off Eastern Sabah. Between 2016 and 2019, a total of 29 incidents of abduction of crew, consisting of 18 actual incidents and 11 attempted incidents, were reported to ReCAAP ISC.

In light of the current threat of abduction of crew in the area, ReCAAP ISC made this Guidance to help the shipping industry and ships improve their situational awareness and avoid such incidents.

The Guidance consists of advisory on the measures to be taken by the ships transiting the area, including contact details and the Notice to Mariners (NOTAM) issued by the Philippines and Malaysia. It also shares the analysis of incidents based on the information collected from past incidents.

From the 18 actual incidents, 75 crew were abducted in total. Among them, 65 crew were released or rescued, and 10 crew were killed or died. As of now, there is no crew in captivity. In order to prevent such incidents, on 14 July 2016, Indonesia, Malaysia and the Philippines signed the Trilateral Cooperative Arrangement (TCA) to address the security challenges in the maritime areas of common concern.

The three countries agreed to encourage the operationalization of the Standard Operating Procedure (SOP) for maritime patrol, and the operating guidelines on information and intelligence sharing; and combined communication plan.

For this reason, the three countries established the Maritime Command Centres (MCCs) in Tarankan (Indonesia), Tawau (Malaysia) and Bongao (Philippines). The MCCs serve as the operational command and monitoring stations for the respective countries.

Under the TCA, the Philippines and Malaysia established the transit corridors within the Area of Maritime Interest (AMI) which covers the common maritime areas. The transit corridors serve as safety areas to passage by commercial ships and they are patrolled by the three countries. 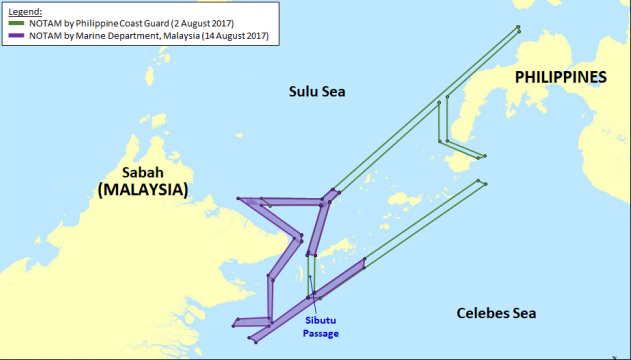 Before entering the designated transit corridors

Commercial vessels are encouraged to pass through the designated transit corridors and sea lanes, as specified in the Notice to Mariners (NOTAMs) issued by the Philippines and Malaysia.

All ships transiting the areas must report to the Centres at least 24 hours before arrival at the designated maritime areas of common concern, with complete ship’s routing information.

All ships are required to render Position Report (POSREP) and Situation Report (SITREP) as they enter the maritime areas of common concern every hour or as necessary.

To mitigate an increasing threat to shipping in the areas of Moro Gulf and Basilan Strait, Recommended Transit Corridor (RTC) was set out to prevent and suppress acts of piracy and armed robbery against ships transiting the areas.

The RTC between the Moro Gulf and Basilan Strait was established by the “Memorandum Circular 2017-002” issued by the Philippine’s Department of Transportation on 31 March 2017 (Annex 3). 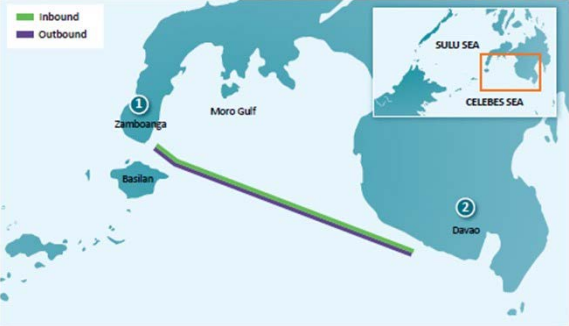