In its weekly report for 12-18 February, ReCAAP ISC informed of one incident of armed robbery against ship in Asia, involving the Singaporean-flagged bulk carrier ‘RTM Dampier’ while anchored at Caofeidian East Anchorage, China.

According to data provided by ReCAAP ISC, while at anchor, a perpetrator boarded the ship. The 2nd Officer sighted from the port bridge wings that the port low sulphur diesel oil (LSDO) tank manhole was opened and there was a hose connected to the tank. Over the port ship side, he saw a small unlit barge. He immediately alerted the master and chief officer.

The duty A/B who was making his security rounds was also alerted to check on the port side. The perpetrator removed the hose from the tank immediately and jumped into the barge when his presence was discovered. Following the incident, a search on the ship was conducted. There were no other perpetrators found onboard the ship. 67 metric tonnes of LSDO was reported stolen. 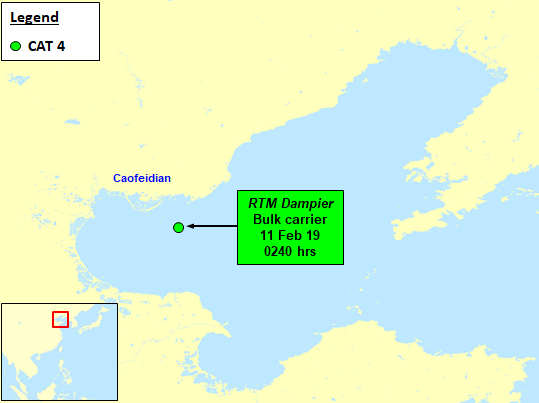 The report informs about another incident outside Asia, involving the Singaporean-flagged container ship ‘Ever Diadem’.

While the ship was en route to Mombasa, Kenya, the master noticed via the radar a suspicious vessel without approved identification system (AIS) at his vessel’s port bow. The master monitored the suspicious vessel although it did not appear to show any signs of attempt to come near the ship.

About 20 minutes later, the suspicious vessel started to move at small angle, followed by changing its course to starboard side and increased its speed and was sighted to approach the ship’s route.

The master immediately increased speed of ship, adjusted his course and closely monitored the suspicious vessel. The general alarm was sounded and all crew were notified. The crew closed all access to the accommodation, started fire pump and activated anti-piracy watch.

At about 1246 hrs (local time), the master reported sighting of a second suspicious vessel on its starboard bow. However, the vessel did not show signs of attempt to come near the ship. The crew checked the surrounding and four hours later, the ship was cleared of suspicious vessels.