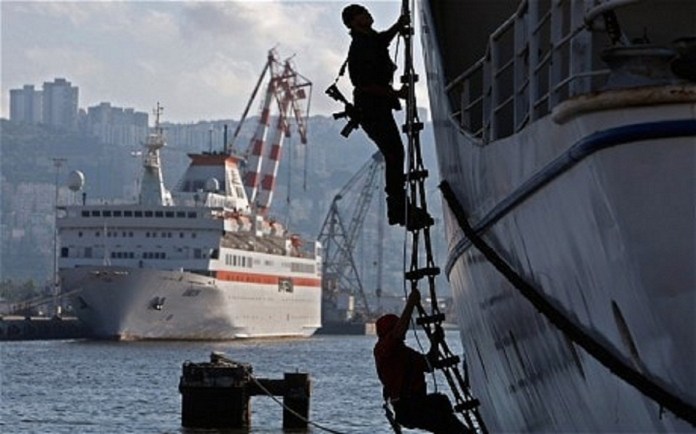 Over 20,000 merchant ships, including ten percent of global oil trade, transit the Gulf of Aden annually. Most of the major maritime nations rely on the free flow of commerce across the high seas, and protecting those flows is the strategic mission naval forces. As long as ships go to sea there will be piracy.

The Gulf of Aden is three times the size of the Gulf of Mexico and requires enormous resources to patrol. To manage the problem, nations must work together to develop the right strategy and provide the resources to confront pirates directly as well as confront the sources of piracy in Somalia and adjoining stretches on the sea.

The spike in pirates’ attacks can be attributed to the widespread drought and famine gripping these regions. In addition, as in years past, there has been increased frustration with commercial fishing vessels trawling well within the territorial waters of Somalia without regard for international laws.

The ITS Carlos Margottini, alongside the Spanish Warship ESPS Meteoro, is tackling piracy and armed robbery off the Somalian coast. European Union naval forces are also working with other organisations to strengthen maritime security and protect vulnerable shipping in the Horn of Africa and in the Western Indian Ocean.

Operation Three Arrows, a counterpiracy exercise that brought together warships and patrol aircraft from the United States and six other nations, patrolled the Gulf of Aden with naval drills. The U.S.-led Combined Maritime Forces, based in Bahrain, combined with the European Union Naval Force coordinated the event recently.

Warships from Japan, Spain and Italy and maritime aircraft from Germany, Spain, Japan and the United Kingdom practice interacting with fishing vessels and dhows in the region. The small Djiboutian navy also assists by informing local vessels of the warships in the region and collecting information on suspicious activity.

As one of three commands that fall under the U.S.-led combined force, CTF 151 patrols parts of the Indian Ocean, Gulf of Aden and the eastern coast of Somalia performing counter piracy operations and engaging with regional partners to protect shipping lanes.

The forces hand out water and first-aid kits to the fishermen. Such engagements are designed to build communication with the community and help the forces gain valuable knowledge about local maritime activity (and) identify suspicious activity early.

Piracy in the Gulf of Aden has significantly declined since the launch of the EU’s Operation Atalanta and the formation of CTF 151 in 2009.

Atalanta operates in an area covering the southern Red Sea, the Gulf of Aden and a large part of the Indian Ocean, including the Seychelles, Mauritius and Comoros. The area of operations also includes the Somali coastal territory, as well as its territorial and internal waters. EU warships also conduct patrols in the Gulf of Aden and the Indian Ocean.

There were more than 45 attacks by Somali pirates in the Gulf of Aden and surrounding waters in 2011. So far this year, only one attack was reported off the coast of Somalia. In February, a Singapore-flagged tanker was fired upon by three skiffs about 160 nautical miles off the Somali coast. After the onboard security team fired back, the pirates retreated. “We work 24/7/365 in our baseline counter piracy role,” said Lt. Col. Dave Fielder, EU Naval Force spokesman.

Fielder said the focus on the Somalian coast complements work done by CTF 151 partners. “We have been doing this together for many years and we are comfortable partners. Our recent work together is part of the ongoing commitment to the region to address piracy and wider maritime security issues.”

The international community made great strides in reducing Somali piracy during the past ten years, and the joint Naval forces have played a key role in that effort.

A successful long-term strategy to eliminate piracy will require a two-pronged approach: an international naval force must protect maritime shipping and interdict pirates, while diplomatic, security, and economic efforts to eliminate the root causes of piracy within vulnerable patches on the high seas.