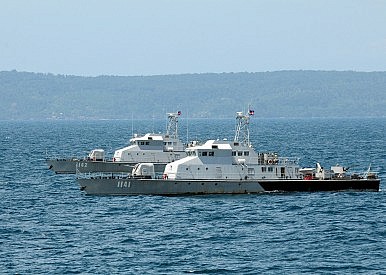 Last week, Vietnam and Cambodia held the 50th iteration of their joint maritime patrols. The interaction offered a glimpse into one manifestation of the the defense realm of the bilateral relationship amid a series of ongoing activities for 2018.

As I have noted before in these pages, Vietnam and Cambodia share an important defense relationship as part of their wider diplomatic ties. Most notably, Vietnam provides the Royal Cambodian Armed Forces (RCAF) with military equipment, infrastructure, and training, while both countries have also looked to manage more sensitive areas of the relationship such as outstanding issues over their shared 700-mile long border and managing illegal fishing in surrounding waters (See: “What’s Next for Vietnam-Cambodia Military Ties in 2018?”).

The past few years have seen an uptick in activity in defense ties due to a range of factors, including symbolic markers for the relationship such as commemoration of the 50th anniversary of the establishment of diplomatic ties in 2017 to Cambodia’s preparations for elections in July 2018 and Vietnam’s ongoing concerns about China’s deepening influence in Cambodia, where Hanoi also is a major actor (See: “The Truth About US-China Competition in Cambodia”).

As part of their defense ties, both sides have tried to forge maritime collaboration as they seek to better manage challenges in surrounding waters, including illegal fishing. One example is basic joint patrols focused on areas such as search and rescue and communication in order to build trust and cooperation and improve the level of coordination. These patrols have become a regular feature of the relationship, and the 49th iteration was held in early January as scheduled.

On March 22, both sides carried out the 50th iteration of their joint patrol as they had indicated in previous discussions on the schedule for patrols. According to Vietnamese official accounts, this time around, the patrols featured Ship 251 from Brigade 127 of Naval Region 5 of Vietnam and Ship 1134 from the Royal Cambodian Navy’s Ream Naval Base.

The patrol featured similar sorts of activities that we have seen with previous iterations, including ones focused on preventing smuggling, drug trafficking, illegal immigration, weapons and explosives transportation, piracy, maritime environmental protection, and addressing issues related to fishermen. Activities themselves included practicing flag and lamplight signals, conducting a search and rescue exercise, and other exchanges at sea. As with previous iterations, few additional details were publicly disclosed about exactly what these activities involved and what other discussions occurred.